Hmmm, how do I start this post…..  Amazing, spectacular, highlight of the trip so far?

We very nearly didn’t do the East Macs, what a shame that would have been. They are just, as if not more, picturesque then the West Macs, but no where near as crowded.

We based ourselves at Trephina George, it is bitumen all the way until about the last 8klms where it is a well maintained unsealed road. The first afternoon we took a little walk through Trephina Gorge, beautiful! In actual fact, this is one of my favourite Gorge’s of them all, there is no one thing that makes it special, it is just…. I don’t know, intimate? You feel a little more “in it” then just looking at it, if that makes sense? 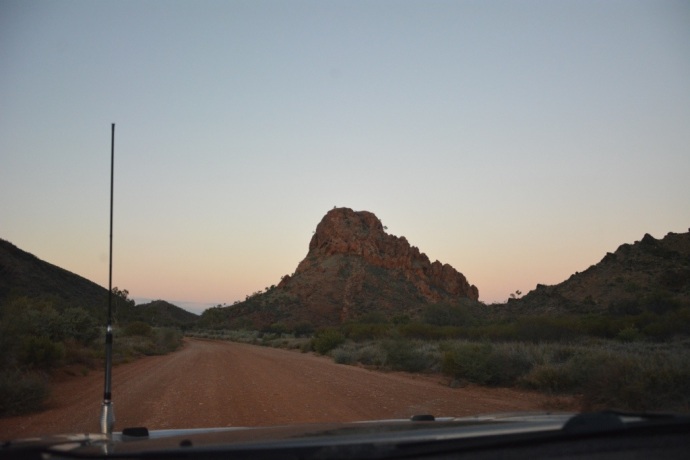 Drive in to Trephina Gorge

The weather began to turn and we were beginning to feel as if we possessed some magical powers, an ability to summon the rain. It rained all night and the next day, and knowing that once again we would be doing considerable walking, we just decided to write the day off and hope the rain cleared the next day. Now by ‘write it off’ I really mean ‘take a mental health day’. It was freezing, dark and rainy, we didn’t get out of bed till about 0930 (the bed was filled with children poking and pinching and tickling each other so don’t think this was some relaxing sleep in). To finally entice us out of bed Jess braved the sub zero temps (it really was) to turn all 4 stove burners on and get some pancakes going. Within minutes we were all up and filling or bellies with pancakes with maple syrup or Nutella and sliced banana, coffee and juice, yum yum!

Still not interested in opening our magic door (Karen Camper’s door has the ability to shut out the real world) we bunkered down on couches, beds and anything soft and warm, we read, coloured in, did some school work and literally didn’t leave the camper (or get out of our PJ’s) until after 1pm! (Don’t judge)

When it came time to see if the outside world did still exist we took a drive to N’Dalha Gorge. We had been told this one had only recently been burned out but it was only a short drive away. It was a fun and challenging drive, and the Petroglyphs here were probably better then at Roma Gorge in the West Mac’s.  We got to do some water crossings and give Peter Prado a good test out! 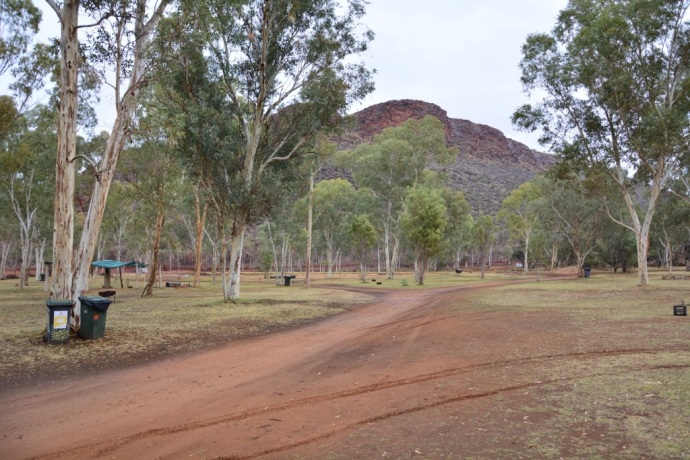 Ross River Station Campground at the entrance to N’Dahla Gorge looked like a nice spot! 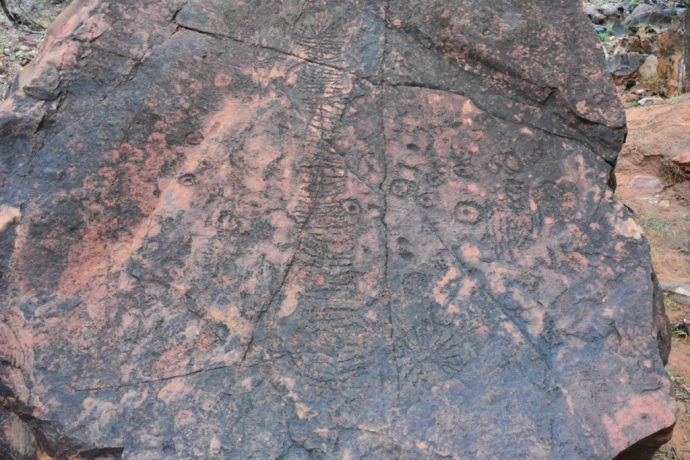 About 5 creek crossing on the 16km’s in to N’dhala Gorge and with the recent rain there was lots of water in them! 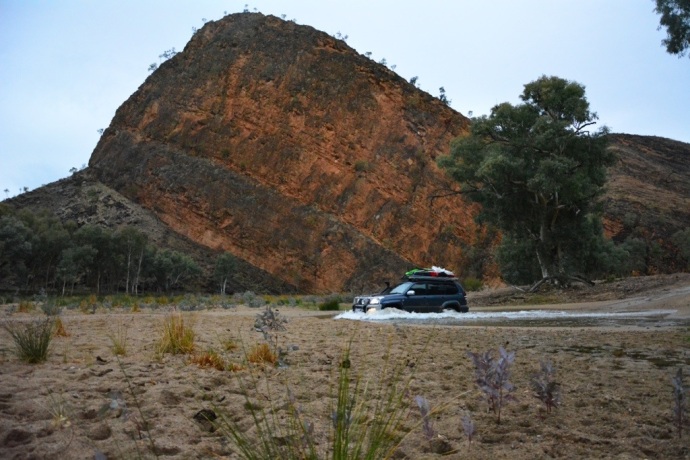 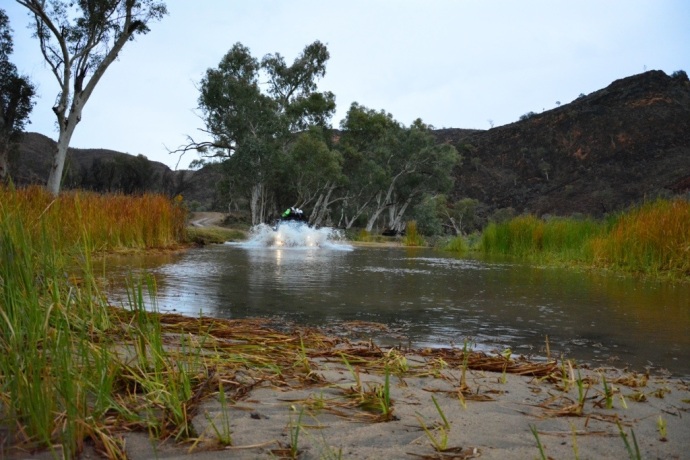 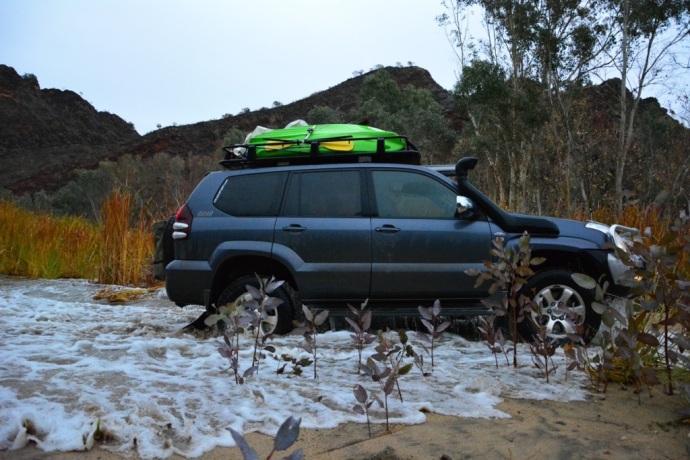 We finished a supremely relaxed day with pizza dinner (Shel and Jai, Ben and Aimz you know pizza dinner in Karen’s oven, mmmm, mmm, mmm) Jess and I even polished off a bottle of red and watched a movie (“So This is 40”). It was actually pretty good, or maybe that was the wine that improved it?

I would highly recommend the camp spot at Trephina Gorge, I still am so impressed with the NT parks and wildlife campgrounds, free gas BBQ’s, individual fire places, tables, toilets, just sensational. We finally got to do some cooking over the fire and did the ‘ole classic sliced chips and steak. 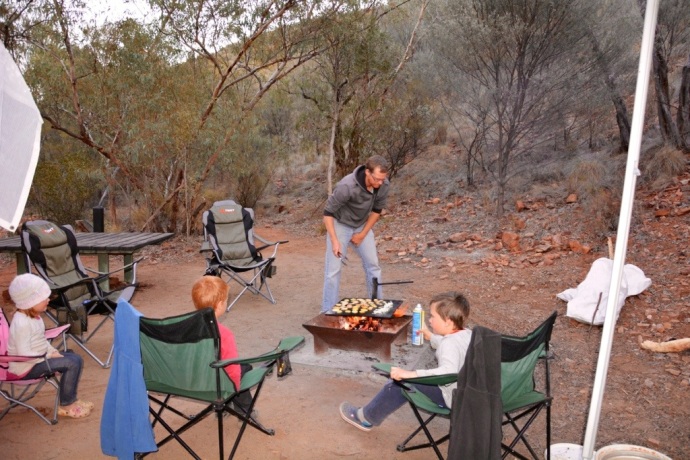 Finally some cooking over the campfire

The next day we needed to get out and about after slothin’ it and headed to Arltunga as Jess has posted about already.

On day three we decided we would do the drive down into Ruby’s Gap. It is a big day and easily the most off road 4wd’ing we have done yet.

Some beautiful scenery on the drive in to Ruby’s Gapy

Ruby’s gap is really interesting, some bloke found what he thought were Ruby’s down there which began a Gem rush, and there are stories of men pushing their entire belongings in wheelbarrows from Adelaide into Ruby’s gap to come and make their fortunes. The first few blokes who came out with their barrows full of “Ruby’s” did make a fortune, but it was soon discovered that the Ruby’s were nothing more then high grade garnets…. Pretty, but worthless. There are stories of blokes who when they received word that they were garnets (England was the only place who could certify them back then so ‘word’ took a while) these poor buggers who had sold everything and poured it into machinery here at Ruby’s gap simply shot themselves. Gives you an indication of the desperation and hard work they had put in only to have barrow loads of pretty dirt.

The funny thing was, we got down there and Jess and I were looking for the park signs pointing in the direction of where the garnets were and we were growing more and more frustrated when we couldn’t find any signs or where the garnets were supposed to be, then I accidentally dropped a bit of lunch on the sand……

The sand is literally crushed Garnets!

Garnets everywhere – we had a ball!

Yeah, the entire place is virtually garnets, the sand is made up of garnet! Once we took a closer look it was quite stunning. It’s a no wonder they would have thought they were on an absolute million dollars back when they thought they were Ruby’s!

Anyway the drive from Trephina gorge took a tad over three hours, included some very narrow track, soft river bed sand for a good few k’s and some good sized rocks to balance over trying to avoid that body damage that could quickly ruin the day. All in all a very good day out. Oh, we were told not to take the camper and I’m glad we didn’t. This one was a car only drive. You could get a high clearance box trailer camper in, but probably not without some damage (it was very narrow in parts). 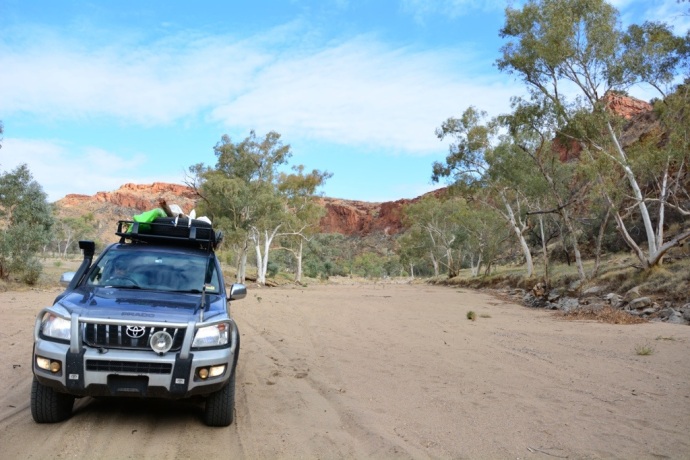 One of the small dips in to Ruby’s Gap (there were lots of them!)